Fourth-annual festival announces lineup of 20 free city-sized street games, including Journey to the End of the Night 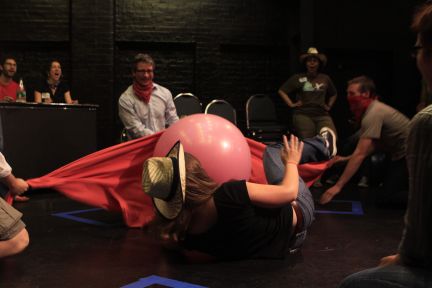 The Come Out & Play Festival will be returning to the Mission District on November 9th and 10th, after the success of last year’s festival and exhibition at the SOMArts gallery, which had over 2000 players in attendance. This year, the free festival takes to the streets again, featuring a wide range of games by local and visiting designers, from city-wide street games, to smartphone-based pervasive games, to alternative sports.

Players can find several large-scale street games at the festival that transform the city into a playground. Popular street games from previous festivals also return this year, including Journey to the End of the Night, which sends players chasing each other in a race across San Francisco and drew more than 1800 players last year. Newly designed games debuting at Come Out & Play include Rumrummers, where players race to make deliveries to locations around the Mission, and Capture the Tag, a competitive game of sidewalk chalk illustrations.

Other games include Monster Stomp, where players roleplay as monsters destroying a foam city; Batonk!, featuring players as robots wearing robot hats; and Witness Protection Program, a detective game based on hide-and-seek. With 20 games over the two day festival, there will be something for every type of player.

About the Come Out & Play Festival

The annual Come Out and Play Festival seeks to provide a forum for new types of public games and play. We want to bring together a public eager to rediscover the world around them through play with designers interested in producing innovative new games and experiences. Oh yeah, and we want to have city-size fun.

Come Out & Play was founded in 2006 to offer the public new ways to enjoy and experience their city through games played in public spaces.  It was the first festival of its kind in the world and remains a leader in identifying trends in public gaming and an inspiration for games festivals worldwide. We show how much fun can be had by combining elements like GPS, sidewalks, chalk, kickball, SMS, capture the flag, bluetooth, and footraces in pedestrian-friendly areas. Since then, the festival has run annually in New York City. In 2010, the festival expanded to the West Coast alongside one of its co-founders. In 2012, the festival exhibited as part of the SOMArts Commons Curatorial Residency program, and was supported by the Arts for Neighborhood Vitality grant from the San Francisco Arts Council.

The 2013 Come Out & Play Festival is being organized by a team of Bay Area players and designers who are passionate about bringing play to the streets of San Francisco. We are once again supported by the San Francisco Arts Coucil and sponsored by SOMArts fiscal sponsorship. In addition to the annual festival, we are hosting a monthly street games playtesting event where new and veteran designers can come together and test games. A schedule of Come Out & Play events in San Francisco, including a full schedule of the festival, can be found at http://www.comeoutandplaysf.org.